A Piece Is Born

When students see my name at the top of a piece of music, we often have a conversation that goes a little like this:

Student: “Sir, did you write this piece?”

Student: (clearly traumatized by this seismic worldview shift) “So you like, wrote this whole piece…”

Student: (in a desperate effort to restore balance to the force) “Did you copy it out from a book?”

This can sometimes continue for quite a while as students wrestle with the concept of a composer who isn’t dead. After the student has exhausted themselves trying to grapple with reality, they ask two other questions:

To answer the last two questions, I thought I’d post about a piece as I write it.

So far this (as yet untitled) piece has taken 3 months, and all I’ve got is 5 bars! (Wow, that’s slow progress Tim!) Here’s what’s happened so far.

Three months ago I was taking a composition class at a music camp. The first activity I get students to do is to write a 4 or 8 bar melody in C major using only basic note values. I usually set a fast deadline (i.e. 10mins) to encourage them to just write something and not try to turn it into their great masterwork. The plan is then to see what they come up with and start from there for the rest of the class. As the students were writing their melody, I thought I’d write a few melodies of my own. Here’s what I came up with. 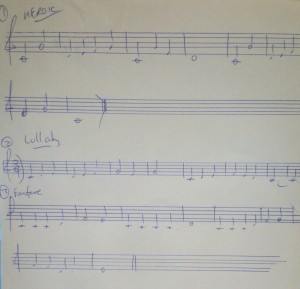 In order to write a bunch of melodies quickly, I made a choice about tempo, feel, and time signature before starting (C major was a given). Then I wrote the first thing that occurred to me, with my only pitch reference being my own voice. This is a bit like musical brain storming and it can be a useful way to generate some ideas. Most might be rubbish, but something might just be the seed for something really good. These melodies made such an impact  on me that I forgot about them for 3 months! The piece of manuscript ended up in my laptop bag, forgotten – until yesterday when I packed up my laptop to go away. I glanced at the piece of paper enough to be able to sing the first two bars of one of the third melody. Since then I’ve been singing those two bars around in my head and thinking about how to expand them into a piece.

Here’s what I’ve been thinking about so far:

So, some take away points from what I’ve done so far are: ·